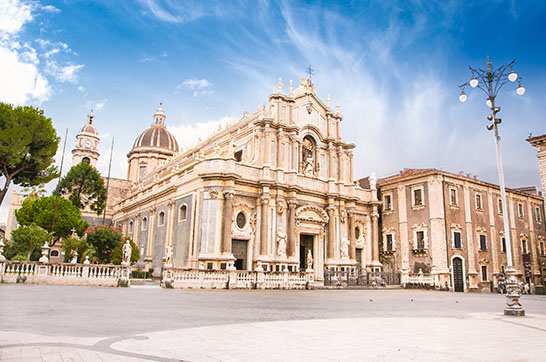 The Baroque city of Mt. Etna by the Ionian sea

Catania is a lively city in all its expressions; founded by the Greeks (Chalcidians) in the 6th century BCE, it is today a Baroque “drawing-room” (Unesco World Heritage) that unlocks its eighteen-century palaces on theatres, amphitheatres and Roman baths; it will surprise you for its simplicity and people’s warmth as well as for the nature monuments’ variety that surrounds it (few minutes away): Mount Etna, a beloved volcano, and the sea, accessible from both golden sand beaches and notched reef coast. An ideal starting point for lovely excursions to the very close town of Taormina (province of Messina), to the Villa Romana del Casale in Piazza Armerina (province of Enna), to Siracusa for a visit to the Parco archeologico (Archaeological Park) and Ortigia, for a walk for through the streets of Noto (capital of the Sicilian Baroque); Catania provide any service to spend quietly and happily your holidays. Don’t: miss: the old town (with its vibrant nightlife), a morning walk into the “Pescheria” (the ancient fish market of the city centre), a daytrip on Etna’s top to the highest craters, passing from one of the characteristic small mountain towns inside the “Parco dell’Etna”. Some of these with a medieval structure produce DOC quality wines (i.e. Castiglione di Sicilia e Randazzo), Sant’Alfio is definitely renown for its food and restaurants, while Bronte  is famous for the DOP quality pistachio and the related delicatessens; a couple of relaxing days to the sea in the Riserva Marina dei Ciclopi (Cyclopes Marine Reserve) in Acitrezza (Isola Lachea e Faraglioni – Lachea Island and Faraglioni), where you can also visit the “Casa del Nespolo” of the Malavoglia (a novel by the Sicilian writer G. Verga), and to the “playa”, the sandy beach which extends for several kilometres; a daytrip to centre of Caltagirone which is particularly famous for ceramics (it is recommended a visit to the related museum). Several theatre and musical activities are performed in Catania, from prose to opera, from classical music concerts to rock and jazz events. A day at the Sicilian water park “Etnaland” is definitely recommended to children and young people. Feast and festivities:in February (from the 3 to the 5) the Patron Saint’s Feast, in praise of Sant’Agata , which involves thousands of “cittadini” (citizens) and tourists following and waiting for the “candelore” (wooden works of art, often baroque, made in devotion to the saint and brought on the shoulders of the worshippers) and the fercolo (the carriage used to move the Patron Saint’s statue during the procession), also known as “vara”, through the crowded and adorned city streets. Typical foods: “pasta alla Norma” (eggplants, tomato and ricotta cheese), pasta with anchovies and bread crumbs (anciovi e muddica), sarde (sardines) “a beccaficu“, and many varieties and receipts of fish, served with orange salads. The rotisserie is great, the most tasty in Sicily, especially for the arancini (fried rise balls) but there is something to suit everybody’s fancy. Desserts and sweet dishes: a very long series of fresh cream and cream pastries, such as the “cannoli” (tube-shaped shells of fried pastry dough, filled with ricotta cheese or cream or chocolate); the “olivette”  (little olives made of marzipan) and the “pastarelle” (pastries) with ricotta cheese, marzipan and candied fruit, are typical of the Patron Saint’s day. The granite (granitas) are really excellent with any flavours, coffee, almonds, chocolate, lemon and other fruits (mulberry, peach, strawberry and more…), as much as the artisanal ice-creams. Other delicious desserts to take away: marzipan, hazelnut and walnut pastries