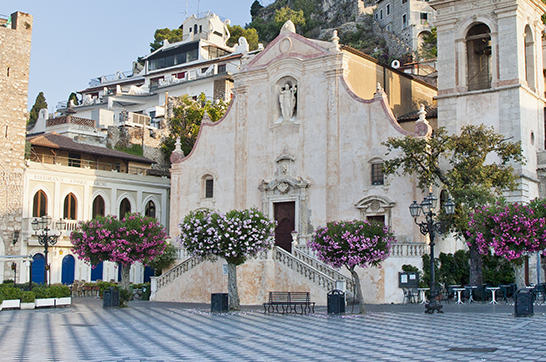 Taormina. The wonders of Ionian sea

This place was inhabited since the 8th century B.C. as proved by the Necropoli di Mola  (Mola’s necropolis), but the first evidence of it dates back to the 5th century, when it was founded by the Sicels with the name of Tauromenion, becoming later a Greek settlement, after the destruction of Naxos. The Greek Theatre was built in this period: the gorgeous scenography make it one of the most attractive places in Sicily to organize international summer performances seasons (opera, ballet, theatre, music), events  and here, since 1954, the international Film-Festival welcomes the world of cinema. Taormina lays on the Monte Tauro, on a high position; during the Barbaric age stood exactly where it does now and it still maintains the medieval structure, with one central street along which noble palaces and public buildings were built and two gates (Porta Catania and Porta Messina) at the ends of the street disclose the dimensions of the old city center. A walk through the little streets colored by nice flowered balconies is recommended to discover its treasures and take the visitor into history, literature and traditions: Palazzo Corvaja (where the tourist office and the location of many art exhibitions) is an example of the medieval architecture; piazza del Duomo, where the Church was built in the 12th century and restructured in the 15th century in the shape of a fortress with merlons on its top; the famous “Belvedere” (nearby “Porta di Mezzo”) that offers an enchanting view of the Naxos bay and of Mount Etna; the medieval Castle, its walls are still visible as well as the remarkable keep and a tower; the public gardens and many  unexpected surprises. The most famous beaches of Taormina are Capo Schisò, Lido Mazzarò, Mazzeo, Spisone and Letojanni. The Isola Bella (nature reserve) is a very small island, a jewel coming out of the sea which is connected to the mainland beach through a narrow path which varies its width according to the tide. Taormina is enchanting in every season as the rest of the island, the delightful food and wines complete this unique dream. Not far from the city many interesting places to visit as Castelmola, Forza d’Agrò (entirely built of sandstone), Savoca (a location of  F .F. Coppola’s movie  “The Godfather”), Mt. Etna (UNESCO heritage) and the “Alcantara gorges” of basaltic lava (Alcantara’s Nature Reserve), the archaeological site of Naxos.