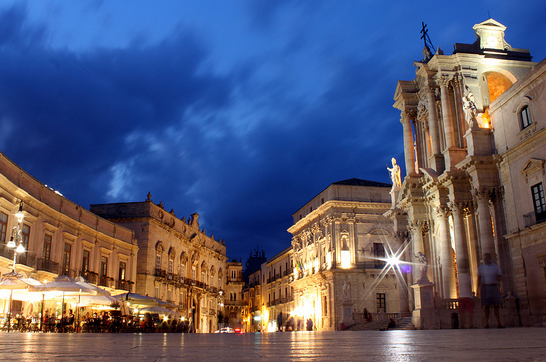 SYRACUSE – Excellence of the Greek city and civilization

The area was first inhabited during the 4th millennium BCE and after the Palaeolithic era, during the early Bronze Age it was a relevant commercial hub connected with the Mycenaean area which expanded in the West Mediterranean. Even Ortigia (U.N.E.S.C.O. heritage) presents allegations of this period: Thapsos’ civilization (tombs). The first tomb, made of Mycenaean and Cypriot materials (14th century BCE), was found in the neapolis (archaeological park), near the “Ara di Ierone II” (altar of Hiero II), According to the tradition, Siracusa was founded by the Corinthians led by Archias. The name derives from the Greek form Syracoussai (the suffix –oussai indicated the natural environment’s security and richness). It appears its urban plan was designed on “Strigas” (regular road networks of perpendicular crossroads forming regular blocks). The first city plan extended undoubtedly from the island to the mainland, where another important neighbourhood, called Acradina, rose. Ancient sepulchres of the city were built at the cardinal borders  of Acradina from the end of the 8th and the 6th century BCE (Contrada Fusco, Giardino di Spagna and Viale P. Orsi) and excavations in these places brought to light several findings, especially potteries. In 599 Siracusans founded Kamarina, on the south coast, bordering thus the territory of Gela. In the 5th century BCE, while the city was menaced by Gela and ravaged by internal struggles, Gelo ascended the power and brought it to a dominant position and to freedom. The arrival of many mercenaries and slaves from the defeated cities determined a radical social and urban transformation and the rise of two new areas. The city grows larger and becomes more important and powerful, even more than Athens, fulfilling so the appetite for power of its tyrant. Siracusa at that time counted more than 100 000 inhabitants. Ortigia, the wonderful island which makes it a unique, represents one of the most characteristic historical centre in the Mediterranean: full of history and precious architectonical jewels, today is a meeting place for young people and art lovers. Don’t miss: the Duomo (Athena’s temple at Greek time), not far from the Fonte Aretusa (Arethusa’s fountain), the Castle of Maniace (Frederic II of Swabe project) , the Gallery of Palazzo Bellomo, the oldest european “Miqweh” in Ortigia,  a visit to the Parco Archeologico (Archaeological Park), the Museo Archeologico (Archaeological Museum) Paolo Orsi, the Castello Eurialo, the Tempio di Giove (Temple of Jupiter) and . What is more, Siracusa was the first city to become a Western Christian Church See: in the 1st century San Paolo rested here during his journey to Rome. Early Christian paintings, very simple and describing the first Christians’ life, can be found inside the catacombe di San Giovanni (the catacombs of San Giovanni – 4th-6th century) and, from the same period, four Early Christian Basilicas (S. Paolo, S. Giovanni Battista, S. Martino and S. Pietro). The typical  performances organised by the I.N.D.A. are another fascinating reason for a stay in the period between May and the and the first days of July, enjoying the splendid sea, both reached from the historical centre and from the nearest enchanting beaches and shining stones cliffs. Noto, Palazzolo Acreide and other amazing destinations with an interesting history and old traditions are easily reached from Siracusa. Feasts and festivities: Feast Day of Santa Lucia, 13 December (a visit to the Basilica Santa Lucia al Sepolcro of the 11th century is recommended), when eye-shaped breads (which are believed to prevent from eye diseases) are cooked.