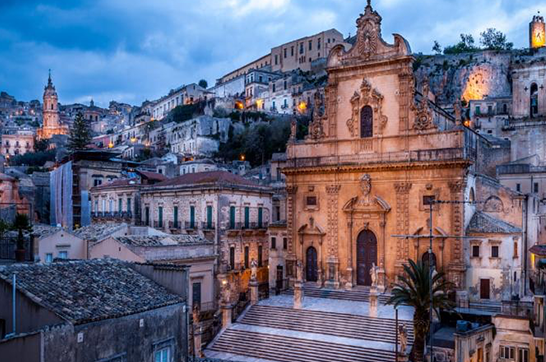 Ragusa and Modica The fascinating cities on stone in “Val di Noto”. South-East

Ragusa It was the ancient greek city of Hibla Heraea, built on the top of two rocky valleys. In the 11th century the Byzantine Castle became the county seat; in 1693 it was destroyed by an earthquake and later rebuilt on a higher part,; it was made of two centres named Ragusa Superiore and Ragusa Inferiore (upper and lower Ragusa). Only at the beginning of 1900, the two towns were unified and Ragusa became province capital, instead of Modica. It is still divided into two centres, Ragusa Ibla, maintains the medieval and Baroque structure, Ragusa looks more modern with a chessboard plant. Ragusa Ibla (U.N.E.S.C.O. Heritage) is undoubtedly the most striking and important part of the city. The city plan is supposed to be medieval, but this idea probably stems by its position on the rocky mountain which forced the architects to design tiny streets and new buildings tightly next to the pre-existing ones for the reconstruction after the earthquake in 1693. Here the Baroque has a particular structure, due to the colours of the chalky stone, to the architects choices and fine local artisans. The dome of S. Giorgio (the cathedral in Ragusa Ibla which overlooks a long stairway) is surely one of the most interesting monuments, as well as the Duomo (the Cathedral of St. John the Baptist), and the churches of Santa Maria delle Scale and Santa Maria dell’Itria. During winter, wrapped in the morning mist, it seems to magically appear from nowhere disclosing in all its beauty; during summer its roads are painted with subtle colours and the beauty of its monuments in such narrow spaces is dazzling. Ragusa is an ideal location for movies and TV series, like “Inspector Montalbano” by Camilleri. The sea is some kilometres away  and can be easily reached through comfortable streets. Driving south towards the Hyblaean Mountains (state road) where it is more southern than Tunis and the plateau’s landscape is a series of pasture and cultivated fields, separated by walls of stone: light spreads unevenly in all directions and seizes us. Suddenly on the left-hand side the mountains appear and after a while a narrow valley with houses on both sides and people walking along its streets: Modica (U.N.E.S.C.O. Heritage). The arrival in Modica is really surprising as much as everything in this city, It was a Sicels’ city (Motyca) and from the Middle Age it was one of the richest and most important lieges in Sicily (County of Modica); today it is the most important town of one of the richest province in Italy, thanks to its agricultural and entrepreneurial activities. Modica was destroyed by the 1693 earthquake too and was then rebuilt on the old site, despite the dispatch sent by the King of Spain commanded the Viceroy the reconstruction on the “plane side”. In 1902 a flood changed radically its aspect and the city was separated into two parts: Modica alta and Modica bassa (upper and lower Modica). It is recommended to visit the area of “Cartellone”, as well as the churches and the beautiful and unique Baroque Palaces. The two patron saints, San Giorgio and San Pietro, are both celebrated with lots of ceremonies and honour. The wines, olive oils and food of this area are unforgettable as the ancient traditional chocolate of Modica (Spanish-Mesoamerica recipe)